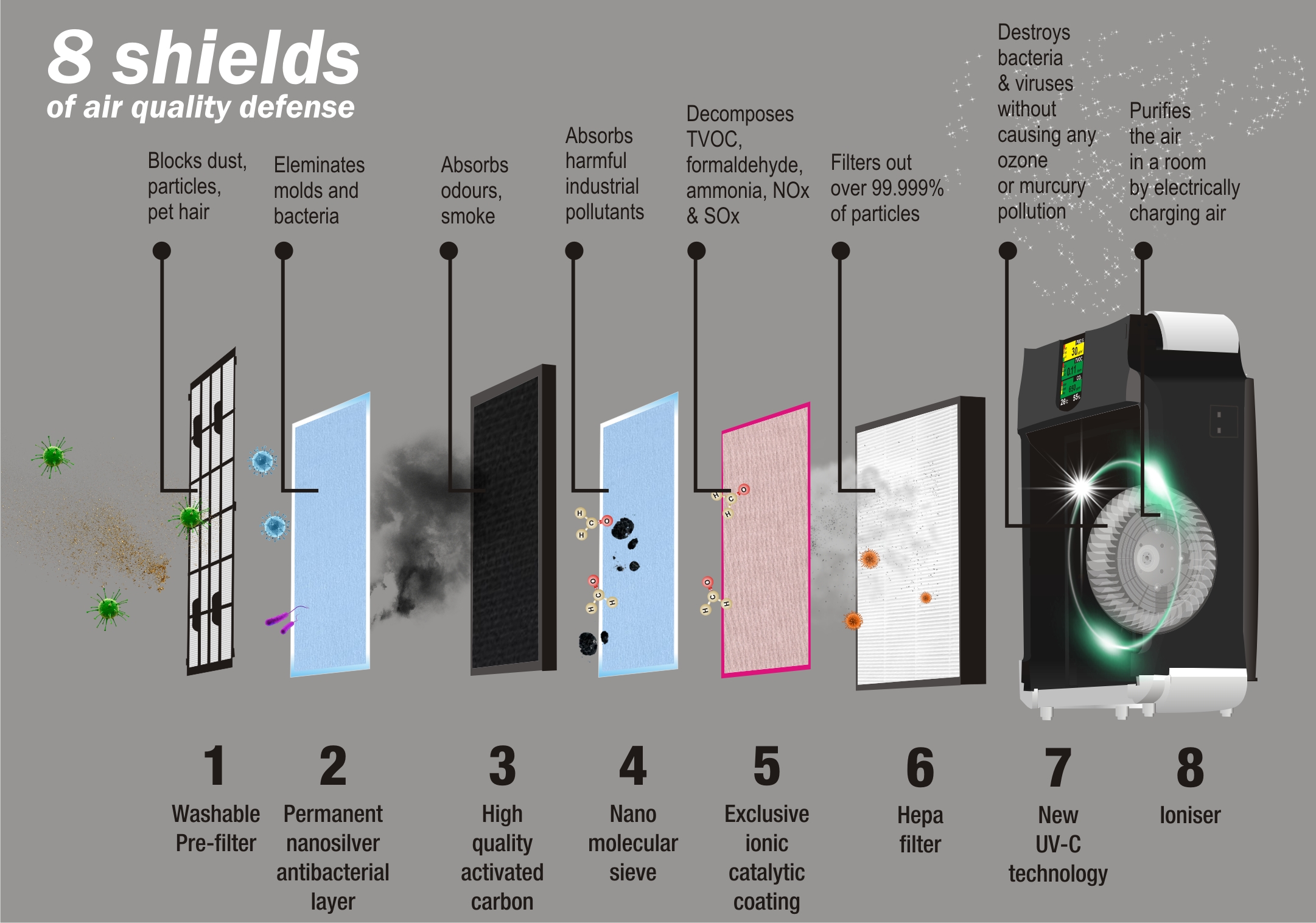 The air we breathe is no longer healthy and clean. Indoor air pollution is increasing briskly and it may wreak havoc on human beings if unchecked. But there are some effective methods to control the indoor environment by capturing small particles and airborne pollutants.

An air purifier is becoming one of the most useful household products as the concentration of harmful pollutants in the indoor air continues to increase specifically in urban areas. According to the U.S. Environmental Protection Agency (EPA), indoor air is around 5 times more contaminated than outdoor air. The concentration of particulates and gaseous pollutants in the air can affect human health badly.

The technical terminologies, used for filtration technology, may be confusing for many users as the sphere of air filtration technology is expanding day by day. Keeping this in mind, here are the latest air filters that are used in advanced air purifiers to ensure a clean and healthy indoor environment.

A HEPA (High-Efficiency Particulate Air) filter is a type of mechanical air filter, which is primarily used in an air treatment system to capture the finest pollutants i.e. microbes and other pollutants in the air. It is used in clean and controlled environments to make sure the air is healthy to breathe in.

Generally composed of polypropylene or fiberglass, a HEPA filter is highly effective in capturing small particles as small as 0.3 microns. It works by pulling air through a fine mesh and capturing small particles like dander, pollens, dust mites, and tobacco smoke. Because of their great filtration efficiency, it is widely used for medical and industrial facilities where hygienic air is a prerequisite condition.

·        It can capture and remove fine particles and particulate matters including dust, pet dander, pollens, and mold.

·        It doesn’t release even a bit of air contaminants that have been captured.

You will find a few options available in the market if you look for an air purifier that uses this efficient filter. But you will be happy to know that some advanced air purification systems like PetriMed CA Air Purification System are engineered with HEPA H14 ISO 50U to offer 99.999% filtration efficiency. They are technically efficient to trap and kill airborne pollutants in a closed environment. Compromising on the quality air filtration efficiency will never be as much as effective as required.

Made of activated charcoal, an activated carbon filter has a unique property to capture and reduce volatile organic compounds (VOCs) and gaseous contaminants, which are found commonly in every home. It is particularly used in air purification systems to reduce unpleasant odors and gaseous pollutants.

Activated carbon filters use a specific chemical reaction known as adsorption that captures gases and unpleasant odors in the pore structure of a carbon substrate. When used in combination with HEPA filters, it functions as the first line of protection to capture large particles.

·        It has high absorption properties to capture odors and chemical fumes.

·        Once captured, the gaseous pollutants are never released.

·        No ozone or harmful byproduct is produced while capturing the pollutants

Bi-polar ionization technology is the process of inducing charge on small particles to neutralize their effectiveness. It releases the negatively and positively charged ions in the air to react with the pollutants and it agglomerates the pollutants.

An air ionizer creates negative ions, which change the polarity of airborne particles, causing them to magnetically attract together. The charged air contaminants are then collected by the ionizer with a charged collector plate. Most effective ionizers use a stainless steel “needlepoint” to produce negative ions.

·        It can trap chemical fumes, cigarette smoke, and microorganism.

Nano-silver filters are made of silver nanoparticles that help eliminate odor and bacteria from the air. It is widely used in air purifiers for its anti-microbial properties. Due to its microorganism-killing properties, it is used in combination with other effective filters to capture and destroy viruses, pollens, fungal spores, and others.

How a nano-silver filter works?

A nano-silver filter produces silver ions that sanitize bacteria and other microbes and stop them from spreading in the environment. An air purification system with a nano-silver filter is very helpful for people with different allergies as it is efficient to remove pet dander and other allergens from the indoor air.

UV-C light is an eco-friendly and chemical-free solution that modifies the genetic material of microbes to stop them from reproducing and infecting human bodies in any environment.

The short wavelength of UVC light hits the RNA and DNA, affecting the ability of microorganisms to reproduce and infect. Killed bacteria are harmless and cannot spread the illness in any environment. A recent study, published in the American Journal of Infection Control (AJIC) titled as “Effectiveness of 222-nm ultraviolet light on disinfecting SARS-CoV-2 surface contamination,” concludes that the UVC lamp is efficient to kill the SARS-CoV-2 virus that leads to COVID-19.

PetriMed CA Air Purification System might be the one that complies with the standards laid by the reputed global regulatory bodies like ASHRAE, WHO, and NABH. With HEPA H14 ISO 50U along with other filters, its filtration efficiency is up to 99.999% to trap chemical and gaseous pollutants.